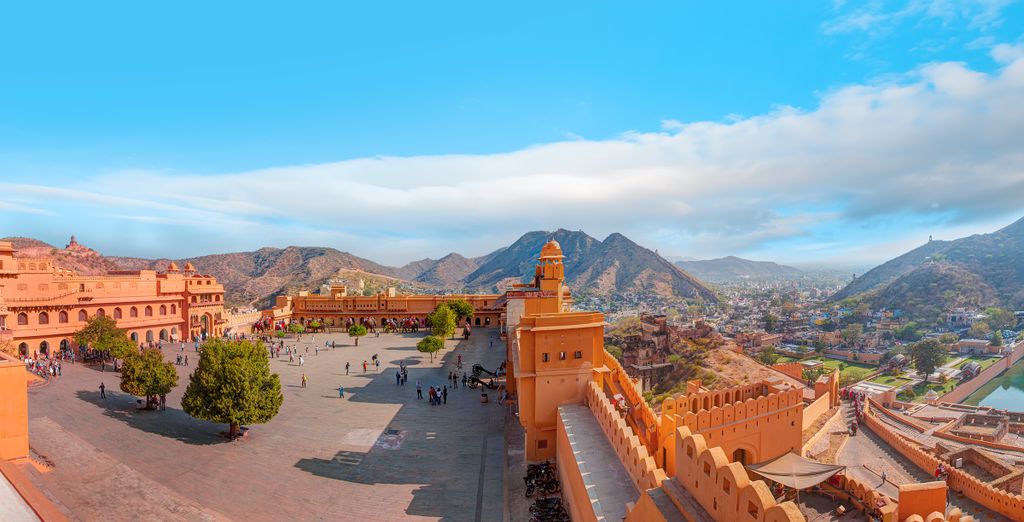 Travel between Udaipur, the City of Lakes, as it affectionately dubbed by the locals, and the state capital of Jaipur is easy and straightforward. Both destinations are located within the same state of Rajasthan and have reliable air, rail and road links. Fly, take a train or hop onto a bus to reach Jaipur.

What is the distance between Udaipur and Jaipur?

The driving distance is 400 km; the railway line stretches for 430 km; flying direct is about 330 km.

How long does the travel take?

The shortest travel time is guaranteed if you fly – planes reach Jaipur in just under an hour.

While the road distance is slightly shorter than rail distance, bussing almost always takes longer than travelling by train.

In general, trains need between 7 hours 30 minutes to 9 hours while there is a whole batch of slow buses that spend on the wheels between 10 and 12 hours. Some express buses, though, cover the distance in 8–9 hours.

What ticket prices to expect?

Trains offer a variety of options ranging between INR600 and INR2,100.

How to get from Udaipur to Jaipur by train

While there is only between two and four departures of direct trains from Udaipur to Jaipur every day, trains remain arguably the most comfortable and convenient way to travel on this route.

How many trains ply the route between Udaipur and Jaipur?

There are two direct trains that connect Udaipur and Jaipur on a daily bases. Then there are three more trains which operate once a week – one on Monday and two on Saturday. UDZ HW Express train 19609 calls to Udaipur three times a week – on Monday, Thursday and Saturday.

How long does it take to reach Jaipur by train?

Not only trains are generally more comfortable than buses, they are also faster on this route.

The both daily trains cover the distance between Udaipur and Jaipur in seven and a half hours. The remaining four trains are slower but all of them arrive to Jaipur in under nine hours.

What are the best trains to consider for Udaipur–Jaipur travel?

The both daily trains are very good schedule-wise.

The direct UDZ JP Udaipur Jaipur Express which originates from Udaipur and has Jaipur as its terminus is probably better in the way you border it fresh after cleaning. It is scheduled rather conveniently, too, to leave Udaipur early in the morning at 6 am and makes it to Jaipur in the early afternoon by 1.30 pm. It has a selection of seats in different classes and differently priced.

If you prefer travelling by night and are not superstitious, then opt for UDZ KURZ Express 19666. It departs from Udaipur at 10.20 pm and reaches Jaipur early in the morning before 6 am.

How much are the railway tickets?

The best options from the point of the price vs quality ratio are air-conditioned tired/berths classes from the cheapest 3rd class (INR1,200) to the more upscale and comfortable enough 2nd class (INR 1,450). The first class sets you back INR2,100 approximately.

Which stations do trains depart/arrive to?

In Udaipur, trains leave from the main Udaipur City Railway Station (UDZ), slightly out of the centre, 3 km southwest.

How to get from Udaipur to Jaipur by bus

Arguably the easiest – though definitely not the fastest and most pleasant way to get to Jaipur, buses offer some of the most budget-friendly options plus a huge choice of departures any time of the day and from many departure points in town what comes handy if you need to travel right away.

There is a wealth of operators serving this route, from the state owned Rajasthan State Road Transport Corporation (RSRTC) which daily send at least 24 buses to Jaipur to different private operators. Some of the bus companies with the highest rating include Jakhar Travels, Rishab Travels, Charu Tours and Travel and Raj Travels to name a few.

Where to find Jaipur-bound buses in Udaipur?

The state buses operate from the main Udaipur City Bus Depot, some 5 km southwest of the city centre.

With private operators it is a bit tricky as their bus stands dot different parts of the city and it is highly recommended to get a clear idea where you bus departs from when you book your ticket online. It is not necessarily the main Udaipur City Bus Depot!

Where in Jaipur do buses arrive?

Similarly, Jaipur has a lot of bus stands, some of the most popular are a very centrally located Polo Victory and 200 Feet Bypass which sits off the national highway, some 10 km southwest of the centre.

The main bus stand of Jaipur is called Sindhi Camp and is also very central. It is served by the namesake metro line.

How long is the bus trip to Jaipur?

Some (not all though) of the RSRTC buses are among the slowest, travelling between 10 and 12 hours. The overwhelming majority of the private operators declare they will bring you to Jaipur in the course of eight or nine hours.

What is the price of bus tickets to Jaipur?

There is a great variation in prices, starting from as low as INR300 and rocketing to as high as INR2,000 and sometimes even more.

As a rule, the usual price is between INR600 and INR800. It buys you a seat in an air-conditioned comfortable bus with an on-board toilet. It will travel along the national highway and make several bathroom and snacks stops en route.

There are buses with 2+1 seating instead of usual 2+2, and those are a far more convenient and have more legroom.

If you can, avoid non air-conditioned buses as the trip is long enough and the weather in Rajasthan can be really hot.

How to get from Udaipur to Jaipur by air

Wink – and you are in Jaipur. With a direct flight taking less than an hour, it is a convenient way to travel. As usually, cons of flying include higher prices compared to other means of transportation and a limited number of direct flights. As the distance between the two destinations is not big, flying via connecting airports makes no sense – neither price-wise nor time-wise.

Which airlines fly between Udaipur and Jaipur?

The three airlines which offer direct service are the low-cost carriers IndiGo and SpiceJet and the full service subsidiary of Air India, Alliance Air.

How much are the air tickets?

Calculate to pay between INR2,500 and 3,500 for a flight with budget airlines and INR5,000+ – with Alliance Air. If you are lucky, IndiGo sometimes offer tickets for around INR1,500.

Note that only IndiGo and SpiceJet have one daily flight each. Alliance Air connects Udaipur with Jaipur three times a week only.

Transportation from Udaipur to Jaipur