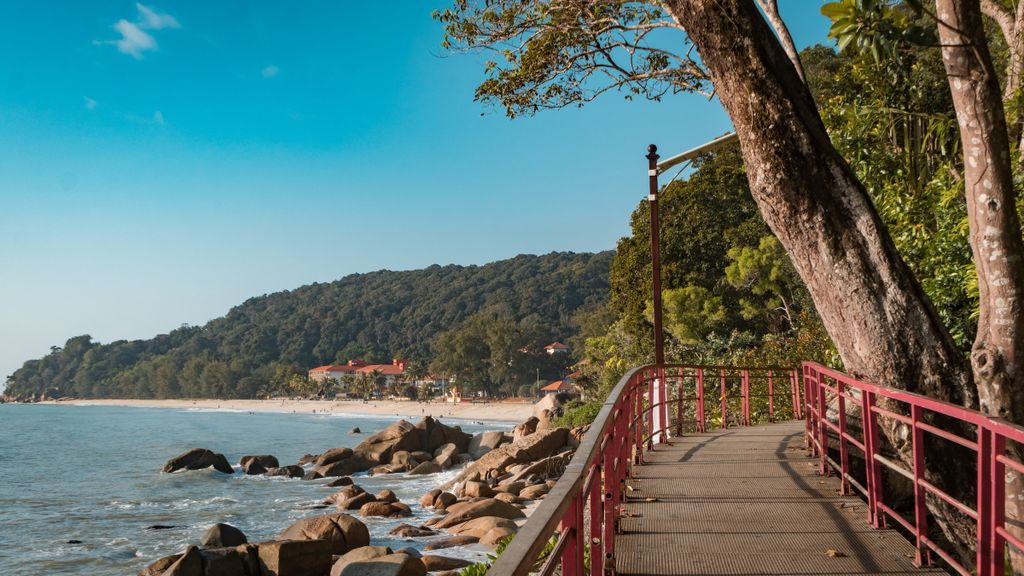 To get from Siem Reap to Kuala Lumpur overland you have to travel via three countries: Cambodia, Malaysia and the whole length of Thailand which sits between the two. The road distance from Siem Ream to Kuala Lumpur is 1900 km, and travelling overland inevitably involves changing transport. That said, transport network in the region is well-developed, so such a journey can be done quite easily, though it will take you at least a couple of days. Flying is a sensible alternative to overland travel in this case – and often money saving, as well. With direct links provided by a couple of airlines you can get to Kuala Lumpur in two hours 15 minutes and connecting flights give you even more choices.

Two Malaysia-based airlines, AirAsia and Malaysia Airlines, offer daily direct flights between Siem Reap and Kuala Lumpur. With flying time of two hours 15 minutes only and rather competitive airfare it is the best and fastest way to travel between the two destinations.

AirAsia has one or two flights to Kuala Lumpur from Siem Reap depending on the day of the week – the morning flights at 8.35am and one afternoon flight added on certain days at 3.05pm. Tickets cost from USD47 and up but for USD100 at maximum it is possible to get a ticket even one day prior to your flight – with the exception of big holidays like Christmas, Chinese and Thai New Year.

Malaysia Airlines offer a bit pricier tickets from Siem Reap than from Kuala Lumpur. Expect to pay from USD75 per person but opposite to AirAsia, some checked luggage (normally 30 kg) is already included into this price.

The international airport of Siem Reap is located 8.5 km northwest of the Old Market area. To get to the airport, take a tuk-tuk (USD5) or a taxi (USD7). Travelling without luggage you can also hop onto a motorbike taxi (USD2). The airport is the second largest in the country after the capital air haven of Phnom Penh but it has very limited facilities for its status.

Note In Kuala Lumpur, with Malaysia Airlines you arrive to the main terminal of KLIA, while with AirAsia you will find yourself in the low cost airlines terminal KLIA2. Both terminals have good transport connections the centre of Kuala Lumpur, 45 km to the south. The best way to get from KLIA to the city centre is by KLIA Ekspress and KLIA Transit services.

If you cannot get a direct ticket, you can always try to fly via Bangkok. It will naturally take longer but anyway not as long as the overland travel.

AirAsia flies from Siem Reap to Don Mueang airport in Bangkok three times a day and there are over half a dozen of code-sharing flights by different companies to Suvarnabhumi airport.

If you need to get to Suvarnabhumi, check Thai Smile deals first.

Prices for AirAsia tickets start from about USD65/THB2300, not including checked luggage and check-in fees. It takes one hour to get to Bangkok from Siem Reap by air.

Tip If you buy two separate tickets from Cambodia to Thailand and from Thailand to Malaysia, you will need to go through Thai immigrations to enter the country, retrieve your luggage and then check-in for your international flight again. Firstly, check visa requirements for your passport. Though the majority of nationalities can get a free 30-day stamp on arrival to Thailand, it always pays to check in advance. Secondly, allow a fair amount of time for this procedure, as queues at the immigration can get astonishingly long and slow, especially at Suvarnabhumi airport.

Always dreamed about crossing a long country overland? Preferably by train? Yes, we know you secret wish to hop onto that famous Transsiberian Express. To tell you the truth, we prefer travelling in a bit warmer countries – Thai and Malaysian railway networks being the prime choice. And, believe us, the pictures you are going to see from you railway carriage window will be not less impressive!

It is not possible to take a direct train or bus from Siem Reap to Kuala Lumpur – you have to combine several trips. The most convenient – and comfortable! – option is probably to get a direct Siem Reap–Bangkok international bus (USD25-USD35; 9–10 hours) and then hop onto international train #45 from Bangkok in Thailand to Padang Besar in Malaysia. There is one daily train from Hua Lamphong train station to Malaysia at 3.10pm arriving to Padang Besar by 9am the next morning (18 hours; USD30), but you can always take an ordinary Thai train from Bangkok to Hat Yai instead and then rely to shuttle trains, taxis or local buses to get from Hat Yai to Padang Besar. It is actually not much different from getting to Padang Besar by direct train.

From Padang Besar, there is direct rail service to the capital, Kuala Lumpur (6 hours; USD20). You may most probably get to Kuala Lumpur even faster, if using exclusively buses, but trains allow you to sleep relatively comfortably at night (or by day, if you wish), so we would recommend them. Such a trip will take you at least 10+(4)+18+(6)+6=44 hours as there are 4- and 6-hour connections in Bangkok and Padang Besar respectively. Combining buses and trains, you can achieve slightly better results, though.

Tip There is not much sense is getting from Siem Reap to Kuala Lumpur overland without any intermediate stops. If you need to get Kuala as quick as possible, then fly. You will most probably save some money, too. The only reason to travel this route overland is to make at least one stopover in Bangkok and probably a couple of more breaks further en route – e.g. in Suratthani for several lazy days in Koh Samui.

To make a detour to Koh Samui, from Siem Reap get to Bangkok by bus and then take a night train or a bus from Bangkok to Suratthani (12 hours; USD27 for a second class AC sleeper).

From Suratthani, buy a combination bus-and-ferry ticket from Suratthani bus station or train station to Samui (from 2½ to 3½ hours and USD 9–USD14 depending on the operator).

Similarly, instead of going to Suratthani, you can get off at Chumphon (8 hours, uSD25), the starting point for a journey to Koh Tao, famous for inexpensive diving lessons and trips. You can then make some island hopping from Koh Tao to Koh Phangan (1½ hour, USD14) , home to the iconic Moon parties, and eventually to Koh Samui (one hour from Koh Phangan; USD10).

From Samui, several ferry companies will be more than happy to bring you to the mainland and to Suratthani train station (2–3 hours; USD9–USD17), where you can catch the next train to Hat Yai or board the same international train #45 directly to Padang Besar.

From Padang Besar, continue to Kuala Lumpur by train or bus.