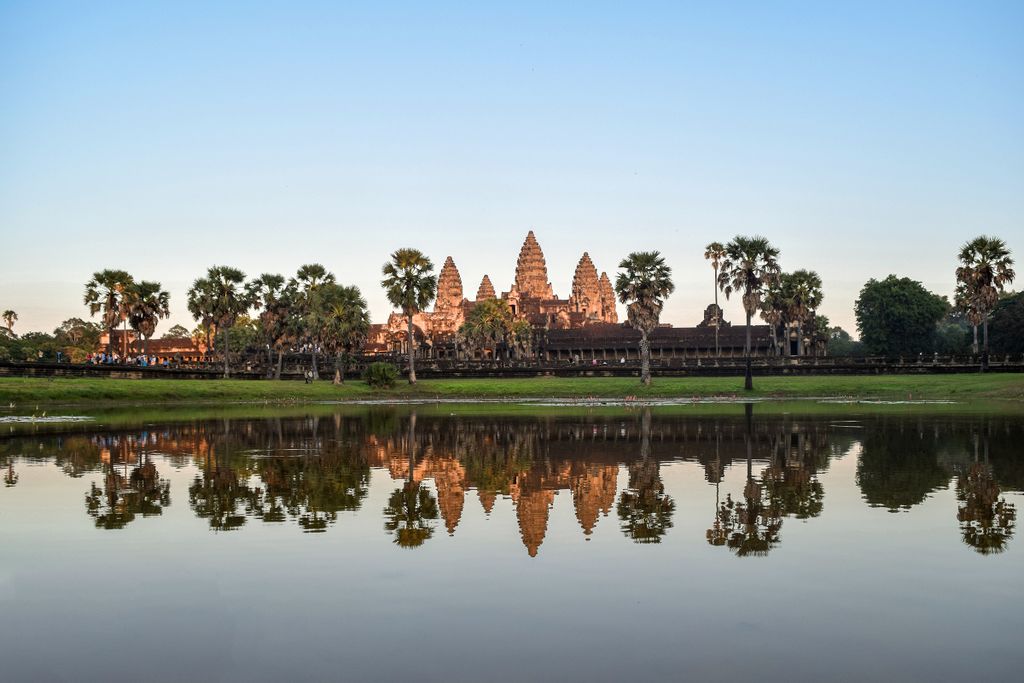 Poipet is located at the border with Thailand, and it is where all the buses going from Cambodia to Bangkok, Pattaya or any other Thai city have to stop. Buses or taxis will drop the travellers on the main street very close to the border offices. Everyone has to walk to the offices where they’ll present their documents, get the stamp and head back to the Thai buses once in the Thai side of the border.

If you decide against buying a combination international ticket but want to go from Phnom Penh to Poipet and then from Aranyaprathet to other destinations in Thailand all by yourself, bear in mind that the border is only open between 7am and 8pm, meaning that if you arrive outside of the times span you’ll have to spend probably a night at Poipet. The main street is not very nice and normally tourists have complained about it, so make sure you book your guesthouse in advance.

From Phnom Penh to Poipet by bus

Plenty of companies operate daily buses with prices ranging from USD10 to USD17 or THB345 to THB590. The distance between Phnom Penh and Poipet is 410km, the journey will take from eight to nine hours. In Poipet, the buses will drop you off almost at the border offices, right on the main road.

Note Buses will take a bit longer than vans or taxis, but they are both cheaper and safer. Cambodian road safety is a concern to be taken highly into consideration. If you wish to take a night bus, the big buses are recommended – van drivers are often careless and reckless.

Buses are pretty comfortable, all companies offer reclining seats, air conditioning, and if you choose the slightly pricier ones such as Mekong Express or Giant Ibis, you will get intermittent Wi-Fi, water and probably a snack. Take into consideration that these companies, although more expensive, are safer and more reliable.

Below you will find the schedule of some of the main companies going directly from Phnom Penh to Poipet:

From Phnom Penh to Poipet by van

Travelling by van from Phnom Penh to Poipet is also possible. Vans cost more or less the same and often leave when full though several companies, e.g. Thero Express, have fixed departures. Vans are faster than big buses and arrive to the destination quicker.

Note Vans are often used by locals carrying a lot of luggage and you can end up literally stuck in your seat. Another issue with vans is the drivers who are notorious for their reckless driving (well, like everywhere around the world, we guess). They overtake a lot during the journey and some roads aren’t very good, what means quite a bumpy ride

From Phnom Penh to Poipet by taxi

Hiring a taxi is tricky, as in most cases you won’t get a taxi with a meter, but just a driver with his private car. Hotels and hostels can help you arrange the trip but make sure not to get ripped off.

Drivers start by asking around USD100 per ride or USD25-30 per passenger – the amount can vary depending on the number of passengers. The normal cost should be around USD60 per ride, but that depends on your negotiating skills and the will of the driver.

A taxi will take from 6 to 8 hours depending on the route you want to travel and again it can be a very bumpy, shaky and stressful ride, you won’t be the first one feeling unsafe in a car with a local driver.

From Phnom Penh to Poipet via Siem Reap

Phnom Penh–Siem Rieap route is one of the most well-travelled in the whole country, so there are many different bus companies that can take you to Siem Reap, however the two most reliable ones are Giant Ibis and Mekong Express.

The distance between Phnom Penh and Siem reap is 312 km. In most cases buses will make one stop for half an hour in Kampong Thom for passengers to go to the toilet and buy some food.

Tip Though travelling by day does steal your time, it is quite an enjoyable experience as the bus drives through rural areas and you can have glimpses of real Cambodia from your bus window – Cambodia filled with rice fields, vast plains, dusty roads and the small towns along the way.

Vans also ply the same route. There are regular departures throughout the day, but try to leave Phnom Penh before noon to get to your destination before the dark.

Most buses and vans will drop you off in the main highway, about 2km away from the centre of town. From there a tuk-tuk will cost you no more than USD3.

Taxis from Phnom Penh to Siem Reap should cost around USD40 per car or not more than USD15 per passenger if there are 3 or 4 of you. The advantage of the taxi that is drops you off at the doorstep of your accommodation. A taxi will take six hours.

From Phnom Penh to Poipet via Battambang

Another way to reach Poipet is through National Highway 5, stopping in Battambang. Mekong Express is the recommended company, with tickets costing USD12. Yet, there are cheaper options, too (from about USD8).

The journey is 290 km long and will take between five to six hours.

**Note that big buses are now not allowed to enter the centre of the city, so it is a good idea to take a van in this very case. All companies drop you off at their respective offices.

Below you’ll find the schedules of the bus and van companies:
Cambodia Post VIP Van USD8
7.30am

From Siem Reap and Battambang to Poipet

A bus ride from Siem Reap and Battambang to Poipet takes around two to three hours. Ticket prices vary depending on the company, but are USD8-10 in average.

From Poipet to Aranyaprathet

If you booked a ticket from Phnom Penh all the way to Bangkok or another city in Thailand like Pattaya, just get the stamp at the border, cross it and look for your bus. Drivers and their assistants will be waiting for you at the other side of the border and won’t let you get lost, no worries.

If you haven’t booked anything, get the stamp, cross the border and head towards Rong Kluea Market in Aranyaprathet, from where buses and vans leave. Buses from Aranyaprathet to Bangkok leave regularly throughout the day and cost between THB200 and 300; the trip takes less than 6 hours.

Vans do a faster job in about 4 hours only but cost slightly more (THB300).

Te cheapest option to get to Bangkok is to hop onto a train which is painfully slow and has third class seats only but cost ridiculous THB48 only. Trains bring you to the very centre of Bangkok to Hua Lamphong train station which has great transport connections with all the other parts of the capital.

Transportation from Phnom Penh to Poipet