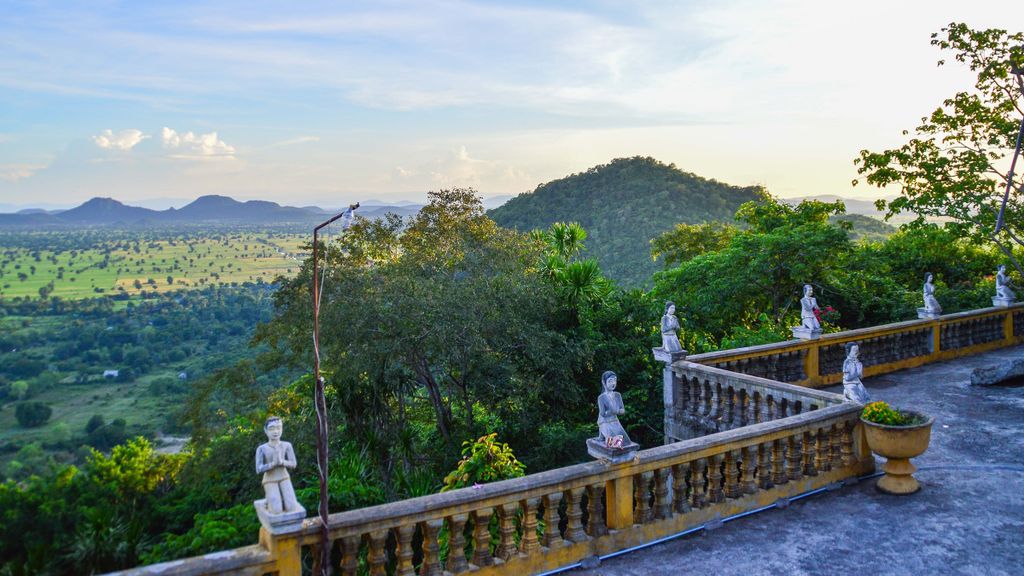 Sitting 300 km northwest of Phnom Penh, Battambang is connected to the capital by Hwy 5 which circumvallates Tonle Sap lake from the western side. A couple of years ago Hwy 5 got a very good pavement and now is in great condition, thus the trip between the two cities takes about five hours by car. The only way to get from Phnom Penh to Battambang is overland. There is a relic railway connecting Phnom Penh and Battambang but it does not function at present, so the actual choice is limited to buses and taxis.

From Phnom Penh to Battambang by bus

A number of companies offer regular buses and vans plying the route between Phnom Penh and Battambang. All of them take from 5 to 7 hours to cover the distance but the quality of service varies. The cheapest buses (USD5-USD6) are usually worn-out, rattling affairs while more expensive buses and minivans (USD10-USD12) are plusher and often offer Wi-Fi on board.

The majority of buses leave Phnom Penh between early morning (6am) and early afternoon (3pm) to reach their destination before dark; for evening and night departures check Virak Buntham and Mekong Express respectively.

Note that from March 2014 big buses are not allowed to enter the city of Battambang and have to use the new bus station located 3 km west of the centre. To get to the city from there, take a tuk-tuk which should not cost you more than USD1. Minivans can enter the city, and normally bring passengers to their company’s office in Battambang scattered around the city centre.

Location-wise one of the most convenient operators is Thero Express. The company operates van service between Phnom Penh and Battambang, picking up passengers in Phnom Penh just one block southeast of the Central Market and bringing them to the very epicentre of tourist activity in Battambang, at the corner of 119 Street and Rd N3. There are four daily departures from Phnom Penh – at 5am, 7am, 8am and 2.30pm.

Why go to Battambang

Some say that Battambang is a Khmer version of Chiang Mai in Thailand with relaxed atmosphere, fancy eateries, abundance of temples and shrines and very friendly locals you do not normally expect to meet in the second largest city in the country – and to some extend it is. You will not meet hordes of tourists there yet, though this time is coming sooner or later for sure. Right now Battambang is a refreshing stop after Phnom Penh’s modern flare, with some colonial architecture still intact, lively vibe, great coffee shops and Angkor-style dilapidating temples dotting the environs of the city. And yes, if you are enchanted with the magic of sacred tattoos, sak yan, you are in the right place to investigate the subject! Finally, Cambodian first – and to date the only – winery is located some 15 km from Battambang.

Getting around in Battambang

While at present Battambang remains relatively traffic-free, bicycle is a great way to explore the city and around. Bicycles can be rented from many hotels and guesthouses for USD1-USD2, though do not expect modern ones. You can also opt for a motorbike (USD7 per day), but bear in mind that police often stop foreign drivers and always find a motive for a fine – no matter whether you have your valid driver’s licence, wear a helmet, obey traffic rules or not. In this case, unfortunately, it is easier to pay a couple of bucks than insist you have not violated anything.

If you do not want to ride two wheels, rely on tuk-tuks which are plentiful. Short rides around the city cost USD1-USD2, but actually you can cover the city centre on foot, too.

Things to do in Battambang

Many visitors say that the most appealing thing about Battambang is welcoming locals, tasty food and scenic countryside. You can easily spend there more time than expected as this often overlooked destination has quite a variety of activities to offer to adventurous guests. Here are some ideas to consider.

From Battambang to Siem Reap

Note Battambang and Siem Reap straddle the northern end of Tonle Sap Lake, with Battambang sitting to the west and Siem Reap to the east. It is only 75 km between the two as the crow flies, but unfortunately there is no direct road connecting them. To get to Siem Reap, you have to travel north on Hwy 5 to Sisophon, half way between Battambang and Poipet, and then turn back south on Hwy 6 to reach Siem Reap. The distance thus grows to 200 km and the whole trip will take at least three hours. It is easier to hop onto a direct bus from Battambang to Siem Reap (USD6), but you can as well connect yourself via Sisophon, though it is more hassle.

For adventurous souls with some spare time a boat trip from Battambang to Siem Reap is highly recommended. Do not expect super comfort, quick transfer or strict schedule, and the price of the tickets may fluctuate depending on where you buy your ticket (up to USD20), but the journey can become a real highlight of your trip. During dry months, especially in March or April, when water level in Tonle Sap lake and the rivers is low, the journey takes up to 12 hours or can be even cancelled, but when weather conditions are good and there is much water in the lake (e.g. November and December) you can get to Siem Reap in about 5 hours. From Battambang you will normally be transported by van to the boarding point, and then go all way through to Siem Reap, the last leg of the journey going down a narrow river (to get to the city centre, you will have to take a tuk-tuk, paid separately, USD5). During your boat trip you will pass floating villages and fishermen nets and enjoy absolutely stunning scenery. If it is the season of water hyacinths blooming, the picture is even more impressive.

There is only one boat a day at 7am.

Tip To have an idea of how long your journey will take, ask the boatmen about their previous day experience.

From Battambang to other destinations

Coming to Battambang from Phnom Penh, you have the major part of the country lying behind you to the south and southeast. For Sihanoukville or Kampot you will have to back-track your way to Phnom Penh; or you can proceed further southeast to Ho Chi Minh City in Vietnam, also via Phnom Penh.

Continuing your journey up the country you can get to the town of Poipet at the Cambodia-Thai border, with its Thai counterpart, Aranyaprathet, welcoming visitors arriving to Thailand. From Aranyaprathet it is an easy 5-hour hop by bus to Bangkok; Yellow Bus alongside with some other bus companies serves a variety of destinations around Isan, the vast Northeastern region of Thailand, including Buriram with its wonderful Khmer temple complex of Phanom Rung.

Touts in Battambang offer ‘direct’ bus transfer to Bangkok and some other destinations around Thailand. Though the service is safe, do not be mislead – you will have to change buses at the border as there is no direct international service from Battambang to Bangkok. You will be brought to the border at Poipet by bus where your bus driver will give you a sticker to put on your clothes or backpack to help their Thai partners to spot you on the other side of the border. You will then have to go through immigration on the both sides of the border all by yourself. Normally exiting Cambodia and entering Thailand is straightforward – check visa requirements in advance! – but if you have any unexpected problems with immigration authorities, your Thai bus is very unlikely to wait for you on the other side of the border. Your onward transportation will be anyway organized somehow, but you may end up waiting for the next transport for a couple of hours and get a seat in a minivan or a local bus instead of a big bus.