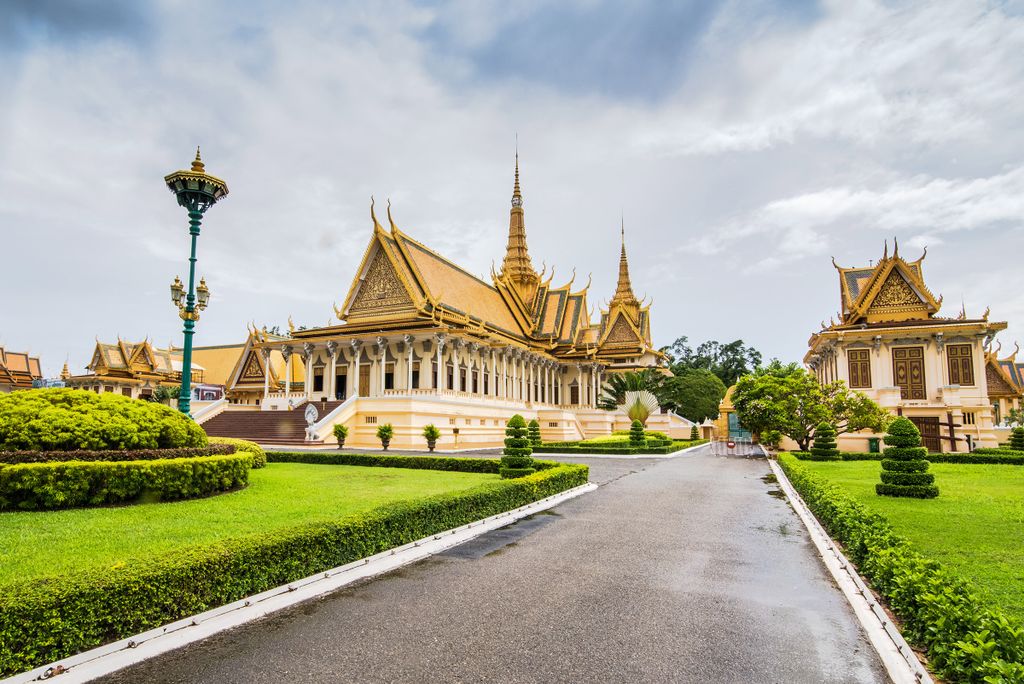 Wide leafy boulevards, exquisite Buddhist temples and a beautiful riverside promenade – even if Phnom Penh cannot boast a lot of large-scale tourist attractions, it possesses its own special charm. Easily one of the least developed capitals of South East Asia, Phnom Penh is changing rapidly nowadays; new Western-style shopping malls and high-rises make their way to the city, and there are even air-conditioned public buses cruising its streets. You can have a look at the darkest years of Khmer history in Tuol Sleng Genocide Museum or venture further afield to the Killing Fields of Choeung Ek. But you can choose just to enjoy Phnom Penh’s – alas! – rapidly vanishing French flavour, indulge in world-wide cuisine offered in its fancy restaurants at half the price you pay anywhere else or absorb the local colours visiting markets and people-watching. There is an abundance of worth-seeing places of interest around Phnom Penh, easily explored during a day trip, including Phinom Chisor, a stunning example of the Angkorian period temples, or Koh Dach, the Silk Island, where you can witness the process of silk weaving and buy some of the finest textiles in Cambodia. All in all, architectural wonders, busy nightlife venues and shopping opportunities galore in Phnom Penh. It may not become your favourite city in Asia, but Phnom Penh definitely deserves a closer look.

From Kampot to Phnom Penh by bus

Local bus companies will be happy to deliver you from Kampot to Phnom Penh is just about three hours. The distance between the two cities is 150 km, and the road is in good condition, so the journey is normally smooth and straightforward. The majority of buses leave from Kampot bus station which lies about 300 m southeast from Durian roundabout. Buy tickets at the spot or online in advance with Giant Ibis Transport – at the moment it is the only bus company selling their tickets via Internet.

There are two buses a day from Kampot to Phnom Penh with Giant Ibis Transport. The morning bus departs at 8.30am and the afternoon one – at 2.45pm. Both leave from the company’s ticket office near Durian roundabout, some 250 m from the riverfront. You can easily walk there from many guesthouses. If you do not want to walk, take a tuk-tuk or check if your accommodation is listed among Giant Ibis’ partners, if yes, free pick-up is provided by the company. Tickets cost USD10.

Note that smaller Universe County buses are used for Kampot–Phnom Penh route. They are generally ok and provide the same quality service on board as in Giant Ibis’ big buses, i.e. a bottle of water, free Wi-Fi and electrical outlets for recharging your gadgets. All the passengers are covered with insurance during the trip and the company has flawless safety record (and seats with safety belts which are actually not heard of in other buses in Cambodia). It all sounds really great. That said, ‘C’ seats, which are jump seats, can be not as comfortable as you expect, as they have low backs. Try to avoid them if you can. The first row of seats right behind the driver is also not a very good choice as it has limited leg space. Buses do not make scheduled stops during this short journey from Kampot to Phnom Penh, and there are no toilets on board: come prepared.

In Phnom Penh you will be dropped off at the company’s bus terminal located rather centrally in 106 Street. If Phnom Penh is your final destination, take a tuk-tuk to get to your guesthouse – tuk-tuk drivers inevitably meet every arrival. If you are going to continue your journey to one of other destinations served by Giant Ibis, you can wait for your next departure at the bus terminal or leave your luggage there and have a quick look at the capital.

Connecting to other Giant Ibis buses via Phnom Penh

From Kampot to Siem Reap via Phnom Penh

Both morning and afternoon buses from Kampot connect very conveniently to other Giant Ibis buses heading to Siem Reap. If you wish to buy a joint ticket from Kampot to Siem Reap, the only option you will be offered is any bus from Kampot combined with the night bus to Siem Reap (USD10 plus USD15), which leaves at 11pm. In both cases you will have some time to waste away in Phnom Penh – about six hours if you take the afternoon bus from Kampot and 12 hours if you arrive with the morning one. You can take an advantage of a longish stopover to visit a couple of interesting sights in the capital – see ‘Activities’ section below. Similarly, instead of taking 10.30pm bus from Phnom Penh you can opt for any of the two other night buses to Siem Reap (10pm or 11pm).

Though the system will not offer this option, you still can take the morning bus from Kampot which arrives to Phnom Penh about 11am and then jump onto 12.30pm bus from Phnom Penh to Siem Reap. Normally all Giant Ibis buses stick to the schedule, but there is still some risk that your first bus arrives a bit late. Think twice if you opt for this combo.

Another variant is to arrive to Phnom Penh by any bus from Kampot, spend the night in the capital and continue your journey the next day, taking any of the morning buses to Siem Reap (7.45am or 8.45am).

From Kampot to Ho Chi Minh via Phnom Penh

There is also the second bus to Ho Chi Minh at 12.30pm which can be caught if you arrive with the morning 8.30am bus from Kampot. But as in case with Phnom Penh–Siem Reap bus, it is a bit risky to rely on one-and-a-half-hour stopover.

Note that you should obtain your Vietnamese visa prior to your trip as there is no visa on arrival service on the land crossing between Cambodia and Vietnam. You will be refused transportation without valid visa. Check all the visa requirements for your passport in advance.

If you have traveled at least a bit anywhere in Cambodia, you may have noticed that the Khmers know no modesty as far as the width of their roads is concerned. This local love for expansions makes Phnom Penh tough for covering on foot. Tuk-tuks and motorbike taxis are ubiquitous and plentiful; they are an affordable and easy way to get around the city. Expect to pay from USD1 to USD3 for a tuk-tuk ride, even less for a motorbike taxi.

Renting a scooter is also an option in Phnom Penh. Daily rates are about USD5. Note that helmets are a must, traffic is chaotic and accidents with casualties are not unheard of. Rent only if you are an experienced rider – we mean with some experience in Asian countries.

There are public buses in Phnom Penh. Tickets cost less than USD0.5 per trip. The most useful route is Line 03 which stops at the International Airport, Central Market and Night Market. Line 01 combined with some walking brings you to the Royal Palace and National Museum.

Located literally in the heart of the country, Phnom Penh has good transport connections with all the other cities and towns around Cambodia and in the neighbouring countries. Apart from the already mentioned Kampot, Sihanoukville and Ho Chi Minh, some of the destinations which you can reach overland from Phnom Penh, include Poi Pet, Battambang, Koh Kong, Preah Vihear and Mondulkiri in Cambodia; Bangkok in Thailand; Vientiane and Pakse in Laos.

Transportation from Kampot to Phnom Penh