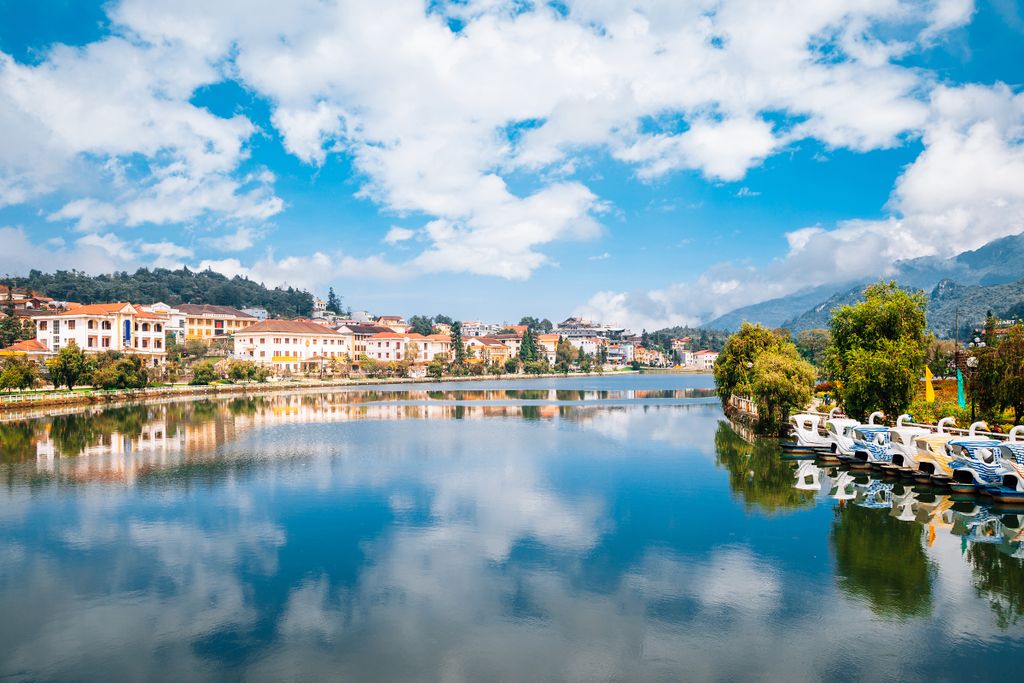 SO
Samuel O
The journey itself was fine. However, we had real problems
Van VIP, Grouptour (Công ty du lịch quốc tế Grouptour), May 19, 2022
JT
Jason T
A new experience for me, the bus was comfortable and clean. Locals were also riding the bus so we can follow their etiquette
Bus VIP Cabin, Sao Viet (Sao Việt), May 13, 2022
DS
Danuta S
The bus was very comfortable and the driver was was very careful when driving up to Sapa- no speeding or reckless driving- I would give him 5 stars. BUT the rest of the service was terrible- I booked an early bus, 6am departure. The day before I got a phone call from the office to be at the office address at 5.30- fair enough. I had paid for the ticket online, true, but it's a usual practice to be at the pick up point 15-30 min early. On the departure day I arrived at the office on time, not many people there, the bus picked us up and at 5.45 we took off to another meeting point to pick up the rest of the people, still in Hanoi. I dozed off since it was quite early only to be woken up by a screeching bus driver #1. It was at the pick up point #2. He shaken me awake (literary shaking my leg) and with another passenger who was translating for him, he demanded to see my ticket. Then he wanted to know if the backpack that was next to me was my only luggage and why I keep it on the seat- it was my only luggage, small 20l backpack with camera, money and all the other things inside so I didn't want to put it in the baggage compartment. He begrudgingly agreed and he let left the bus. And closed the door. It was around 6am. And we stayed there form 2 h! I could see the people waiting but not allowed to enter the bus. Only around 8.30 they started coming in and we took off. Obviously, we arrived in Sapa at 3 pm, not 12.30 as scheduled or confirmed that morning at the office. No explanation, no appologies- nothing. As I said bus driver #2 was great driver and he brought us to Sapa. Very pleasant and smiley man. Bus driver #1 was a proper asshole, shouting at us in Vietnamese whenever possible and he was about to actually shake my again in Sapa, when I was taking my backpack to leave the bus, as he keep screaching- Sapa, Sapa in my face. Very disappointed with this service and general organisation.
Bus VIP Cabin, Sao Viet (Sao Việt), Apr 27, 2022
DR
Denis R
the bus was comfortable and i felt safe, the staff was also nice.. we had a half hour brake in lao cai.
Bus VIP Cabin, Sao Viet (Sao Việt), Apr 26, 2022
KJ
Kazuhiro J
Train is beautiful and good experience. Easy to sleep and not tried in 7hr riding time. I feel ticket counter is little difficult to find, but it's not serious.
Train #SP3 1st Class Sleeper, Sapaly Express, Oct 13, 2020
DF
Damon F
The price for what is provided is pretty high, so the value for this train trip is very low. The ticket guy for Pumpkin Express was easy to find and even at the station earlier than expected. He was also very helpful in getting me the drinks and snacks for my cabin and providing clear guidance on when and where to wait and board. Overall, it was an okay experience, but I couldn't sleep at all on the train despite having the entire VIP cabin to myself and there were only a few snacks and a couple drinks provided. I was impressed with the fact that I could actually charge my phone and they had a few different working lights in the room. The trains are very old, but they were cleaner than I expected. However, I also traveled only one month after the pandemic lockdown was lifted in Vietnam, so there were very few tourists traveling in general; that's probably why things were in decent condition (even the bathroom was pretty clean for a train). I was disappointed that there was no onboard wifi; luckily I had my own SIM with mobile data plan which worked on some parts of the trip. I took a private, 8-pax bus back from Sapa to Hanoi instead of the train, for which I paid only $25. It was much more comfortable, scenic, and quicker than the train. I likely would not take the train ever again unless the conditions were MUCH better (i.e., they need a complete overhaul).
Train #SP1 1st Class Sleeper, Pumpkin Express, Sep 3, 2020
CP
Cecile P
It was nice. I was actually warn on the first level. People downstairs were a bit cold. But quite comfortable. Nicely organised and clean. Just don't follow people straight out of the train... They didn't leave us a chance, and we didn't do what we wanted to. Also prices were as usual.... Pricier. Don't get the coffee outside as well, its 3 times the price.
Train #SP3 VIP Sleeper 4x, Laman Express, Mar 23, 2020
MT
Marino T
too much cold with the air conditioning too much noise! impossible to sleep on this train!
Train #SP3 VIP Sleeper 4x, Laman Express, Mar 21, 2020
JH
Joshua H
I can’t tell anything because we didn’t go because everything was closed in Sapa because of Corona . We payed for a trip and had nothing.
Bus VIP 20, Sapa Express, Mar 19, 2020
JS
Joachim S
Well, the driver was on eine in the morning. He offers a small snack after collecting all 5 passengers. On the ride we had 2 short tests for bathroom, etc.
Bus VIP 27, Sapa Dragon Express (Sapa Dragon Express), Mar 14, 2020
4.4
1792 customer reviews
5 40%
4 31%
3 14%
2 7%
1 8%

How to get from Hanoi to Sapa

When you want to get from Hanoi to Sapa, you have a few options to consider. Traveling between these destinations is possible by different means of transport:

If you’re looking for a quick trip, it’s recommended that you use Taxi. However, if you’d rather take your time with a slower, more affordable travel option, you can book a Taxi+train ticket.

The cost of travel will depend on the means of transport you choose for your trip. A taxi ticket is the most expensive option - it will cost you about THB 9,806. If you want to save on transportation, it’s better to take a van as a van ticket costs as low as THB 478.

How far is Hanoi from Sapa?

How long does it take to get from Hanoi to Sapa?

The travel time from Hanoi to Sapa can vary depending on the mode of transportation you choose. All things considered, the whole journey should take from 5 to 10 hours.

How much does it cost to get from Hanoi to Sapa?

The cost of the trip from Hanoi to Sapa varies according to what means of transport you choose for your journey. The most affordable operator is Grouptour (Công ty du lịch quốc tế Grouptour): travelling by van expect to pay as low as THB 478 for your ticket.

However, if you’re after more upscale travel . The most expensive variant is to opt for a taxi - a one-way taxi ticket can cost as much as THB 9,806.

Here is a chart of the average ticket prices and transportation options available from Hanoi to Sapa:

How many trips per day are there between Hanoi and Sapa?

Taxis are a good option to consider for this route, too. Book a cab to take you from Hanoi to Sapa any time of the day.

Taking a bus from Hanoi to Sapa is cheaper than flying. Quite often, a long-distance bus is the cheapest transportation option. Buses normally make bathroom and/or lunch stops along the way.

Catching a cab is the easiest way to get from Hanoi to Sapa. It allows you to tailor-make your trip, plan all the detours and see all the places you want. You can choose the type and the size of your car as well to be as comfortable as you'd like to.

Things to remember: It's a good idea to follow the route on Google Maps or any other GPS navigator.

Things to remember while choosing a train ticket:
Consider everything carefully while choosing the class of your train travel. In most cases, the second class is comfortable enough – it features 2 or 4 berths in each compartment and is often air-conditioned.

A shared van is another means of transport for traveling from Hanoi to Sapa. As far as travel time is concerned, it’s basically equal to a taxi ride, while price-wise it’s way more affordable. The majority of tourists book a van online in advance.

Sometimes, when trains or buses aren’t available, a van is your only way to get from Hanoi to Sapa.

Things to remember: while traveling by van, you might not have as much space for luggage as you would on a train or a plane. It’s a good idea to pack only the most useful things for a van trip and put them in a backpack that will be easy to carry around.

The most popular transport from Hanoi to Sapa

How to choose the most convenient way of travel from Hanoi to Sapa? In order to make your choice of transportation easier, we asked 1000 users to range their preferences for this route. Here are the results of the poll: