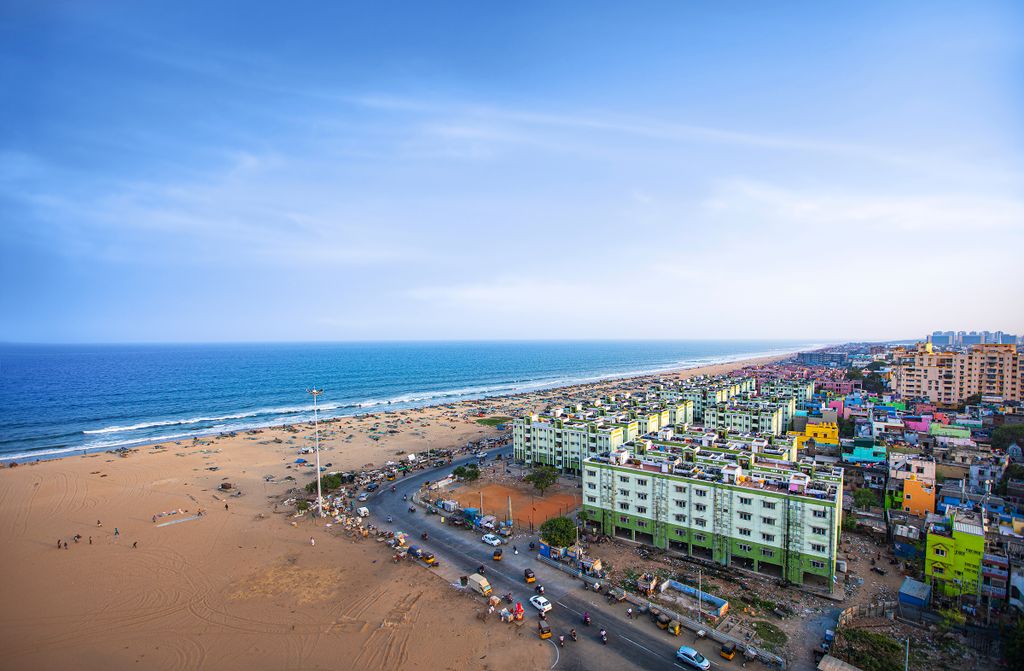 As Delhi is in North India and Chennai is in the far South, the most convenient and fastest way for getting from Delhi to Chennai is to take a flight. However, on a budget, travellers may find trains to be a better option; they’re cheaper and allow one to see more of the country. Buses are also an option, but more cumbersome.

The distance between Delhi and Chennai is 2161 kilometres by road, which will take 40 hours on a non-stop journey. The distance by rail is similar at 2175 kilometres, but takes less time; around 28-30 hours. Meanwhile the aerial distance is significantly less at 1760 kilometres. Thanks to this, it would take one only three hours to fly from Delhi to Chennai.

A flight will cost a traveller between INR 2500 to 5000, depending on the airline and when
you book. Meanwhile, train tickets are more dynamic, priced between INR 800-5000 depending on the compartment class and the time you book the ticket. If you’re travelling by bus, you will have to change buses several times and the combined ticket price can go upto INR 3500.

Flights from New Delhi to Chennai

There are several flights daily from the Indira Gandhi Airport in Delhi to the Chennai Domestic Airport. The ticket prices range between INR 2500-5000. One can get the best deals by booking tickets on websites like ClearTrip, MakeMyTrip and Yatra which have discounts. Booking in advance (at least a few weeks before you intend to travel) will also assure you better prices.

Most of India’s domestic airlines fly the Delhi to Chennai route and there are flights available
from early morning to late at night. Popular carriers include Jet Airways, Air India and Vistara.

Budget airlines are IndiGo and SpiceJet. While all airlines allow between 15-20 Kg of
free checked in baggage, the budget ones do not serve meals or water; they have to be purchased on board or carried by travellers. We’d recommend you get food and water before boarding as the prices on board are twice or triple regular prices.

Buses from New Delhi to Chennai

It will take approximately 55 hours to get from Delhi to Chennai by bus, but one must also account for the time it’ll take to change buses and get to different bus stops. Multiple changes of buses can get exhausting, so it’s recommended to stay the night in one of the cities.

Since there are different bus operators, there are frequent departures from each city on the route.

Depending on the operator, one can expect different amenities; most, however, have air conditioning. There are no toilets on board so one will have to hold out for bathroom stops which are every few hours. Most buses broadcast Hindi movies on overhead television screens.

While one can travel from Delhi to Chennai by bus, it’s not recommended because of the time it’ll take and the stress that’ll be caused when one has to constantly change buses. If you’d rather not take a flight, a train is the next best option.

Trains from New Delhi to Chennai

Depending on the train’s route, travel time between Delhi and Chennai by train varies; it can take anywhere from 30 to 45 hours.

There are a fair amount of trains which play from Delhi to Chennai including the Andaman Express and the GT Express and so there are depratures each day. Most of the trains leave in the early afternoon or late at night.

The quality of seating on the train greatly depends on the type of class you’ve booked. 1AC is first class with 2 or 4 berths and complimentary meals, air-conditioning, clean toilets, showers and an attendant to make up your berth at night with pillows, sheets and blankets.

The 2nd AC class has 4-6 berths in the compartment and has similar facilities compared to first class although you’ll have to make up your own bed!

Meanwhile, the 3AC also has air-conditioned but has more berths in a compartment which means you’ll have to compromise on privacy. Toilets are less clean and meals are not complimentary.

Avoid taking the Sleeper Class - while extremely cheap - there aren’t any berths to sleep on making the journey exhausting and uncomfortable.

Transportation from Delhi to Chennai