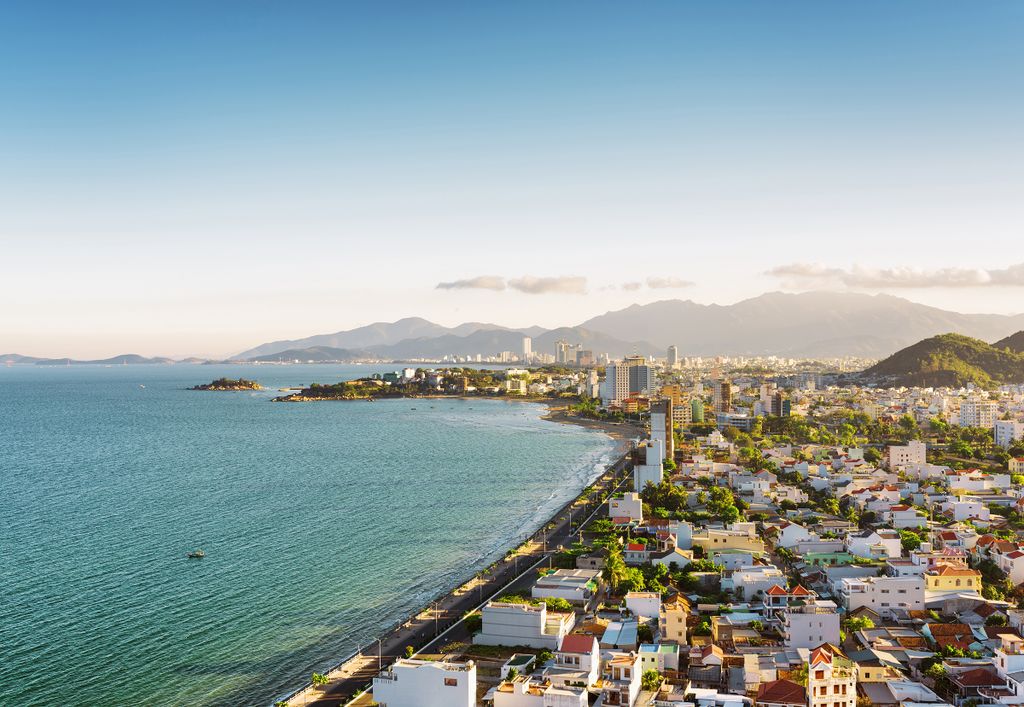 Wondering what the most popular seaside resort town in Vietnam is like? Look no further. Lively and urban, Nha Trang is most probably not the best spot to go if you are longing for solitude and tranquillity, but its white sand beaches, even if sometimes littered, running the length of a beautiful bay with several picturesque island scattered in the sea and quite a wide choice of activities are a big draw, and the title of the main diving centre in Vietnam ensures a constant flow of visitors of all budgets, both domestic and foreign, almost any time of the year.

From Danang to Nha Trang

Danang is an easy 1½ hour flight from Nha Trang or at least a 9-hour bus or train journey with road distance between Danang and Nha Trang of about 520 km. Almost all the trains heading south from Hanoi to Saigon call to both cities, and local and tourist buses are a decent alternative to the rail travel.

From Danang to Nha Trang by train

All the trains from Danang to Nha Trang are passing through trains on their way from Hanoi to Saigon. Usually there is an about 15-minute stop in Danang; the time indicated in your ticket is the time of departure: come earlier. It makes sense to opt for one of the two night trains: SE7 or SE5 departing from Danang and arriving to Nha Trang at 10.50pm/1.45am and 8.35am/11.35am the following morning respectively. Both trains offer first and second class AC sleeping cars plus soft seats but SE5 is cheaper: e.g. compare prices for berth in a second class sleeper: VND500.000 in SE5 and VND620.000 in SE7 (USD22/USD28).

SE3, which has Violette Express Train VIP sleeper car attached is less convenient from the point of view of its schedule: it departs from Danang after midday at 1.15pm and steals you the rest of the day arriving to Nha Trang late at night (10.15pm) well after dark. Though if you prefer to travel with comfort, do not mind spending a few extra bucks, enjoy seeing the country from a railway car and have your accommodation in Nha Trang already booked, it is obviously the best way to get to Nha Trang from Danang (VND930.000/USD42). If you do not mind travelling by day, consider TN1, as well (leaving at 7.10am and arriving at 5.55pm).

Note that it is highly advisable to book berths well ahead – especially if you are planning to travel to Nha Trang during weekends.

From Danang to Nha Trang by bus

There are both local and tourist buses ready to bring you from Danang to Nha Trang. Local buses use the new bus station in Danang which is about 6 km west of the main tourist headquarters near the river; while tourist buses depart right from the centre of the city. To get to the bus station from the centre of town, use bus #2. Prices for Danang-Nha Trang journey start from VND250.000 depending on the type of the bus. Travel time is from 10 to 12 hours.

Note Possibly the most convenient thing about taking a tourist bus from Danang to Nha Trang is that normally these buses pick up their passengers in the most popular tourist areas. That means you do not need to get to the ordinary bus station or railway station first. It is especially convenient if you have heavy luggage.

From Danang to Nha Trang by plane

Vietnam Airways operate two flights a day between Danang and Nha Trang at 7.55am and 12.55pm, flying time between the two cities being just a bit over one hour. Normally if you book at least a couple of weeks in advance, you are able to get tickets for about USD50 one-way and in any case under USD100 even in case with the most expensive tariff.

In Danang, the airport is conveniently located right in the centre of the city, some three km from Bach Dang and Than Phu area, which form the epicentre of tourist life in the city; but in Nha Trang, you will arrive to Cam Ranh airport, some 30 km south of the city. Airport minibuses bring you to the station in the southern end of Than Phu (USD3); otherwise take a taxi (VND400.000/~USD20).

Getting around in Nha Trang

While there are xe om (motorcycle taxi) drivers on every corner offering rides (and more), you are better off taking a metered taxi. If possible look for the green Mai Linh taxis as these tend to be the most reliable. Should you absolutely need to use a xe om, know that it should cost under USD2 (VND40.000) to go anywhere around the city centre.

Nha Trang is easy enough to get around by bicycle and these are widely available at most hotels for a dollar or two per day. For those venturing out of the city to the nearby attractions, your hotel should easily be able to arrange for a motorcycle rental for around USD5 (VND100.000).

Tip: We recommend staying on the roads near the coast and avoiding the AH1 as that can be a harrowing experience for even seasoned riders while the coast highways are relatively calm.

There are air-conditioned local buses in Nha Trang which are a great way to get around for only VND7.000 per trip. Check #4, which goes from the north, passes through the tourist centre and reaches Vinpearl (the local version of Disneyland).

Where to stay in Nha Trang

Nha Trang has hundreds of accommodation options in all price ranges and styles, most within several blocks of the beach. Prices can tend to reflect proximity to the water instead of overall quality, so take that into account when booking. During slow times you can often get large discounts when you book on the spot but do not count on this at 5am after your overnight train journey or during one of the Vietnamese national holidays.

The highest concentration of rooms is found in Tran Phu Boulevard (the street closest to the sea); Hung Vuong and Nguyen Thien Thuat, running parallel to the seafront, all south of Le Thanh Ton.

Things to do in Nha Trang

The main draw here is the beach which white sands stretch the length of the city. Beach chairs generally cost a few bucks to rent for the day and vendors stroll by regularly selling snacks and drinks. Depending on various factors both the sand and water can become quite dirty by foreign standards. If this is the case you may want to try Bai Duong beach which is a kilometre and a half north of downtown or if you are feeling adventurous – Bai Dai (Long Beach) which is south of Nha Trang, about half way to the airport along the same road. There are several places to relax and eat here and plenty of undisturbed sand to enjoy.

North of the city centre, on a hill overlooking the Cai River are the Po Nagar Cham Towers. The earliest were constructed in the 7th century and are remnants of the Champa civilization which ruled over much of Vietnam and Cambodia in ancient times. The site is still used today by Buddhist worshippers and is easily reached by bicycle from downtown. Wear modest clothes and expect to pay a small entry fee.

Most popular amongst local tourists is the Vinpearl Land located on an island in Nha Trang Bay and accessible via cable car from south of the city. The island boasts an amusement park, aquarium and water park plus all of the arcade style attractions one would expect to find at such a place.

Water sports of all types are available for people looking to enjoy the ocean. You can learn to surf at Bai Dai, go rafting down the Cai River or enjoy any number of diving and snorkelling outings. The sea life is still recovering from a long history of poorly managed construction and fishing practices but Nha Trang is emerging as a great place to get your diving certification and is certainly worth a few trips for experienced divers.

For a different type of beach holiday, try Phan Thiet or Mui Ne. A train journey from Nha Trang to Phan Thiet takes four hours (VND220.000/USD21 for a seat in a second class AC car). It is less touristy than its neighbour resort town of Mui Ne and you can enjoy a very ‘go-local’ experience.

Tourist buses bring you from Nha Trang directly to Mui Ne in five hours (VND200.000/USD10). This long sandy beach has seen a lot of development in the recent decade and now is flooded with Russian package tourists and kitesurfing enthusiasts.

Apart from the two above mentioned beach resort towns, you can head inland from Nha Trang to Dalat in the central highlands. With the look and feel that is decidedly European and a climate to match, Dalat offers a nice change of pace after the heat of the coast. The Sinh Tourist busses depart daily at 7.30am and 1pm, costing USD5 and making the trip in four hours.

Buses, trains and planes connect Nha Trang with the biggest city in Vietnam, Ho Chi Minh, or Saigon. The distance between Nha Trang and Saigon is 400 km – allow from eight to 11 hours to get to Saigon if you go overland.