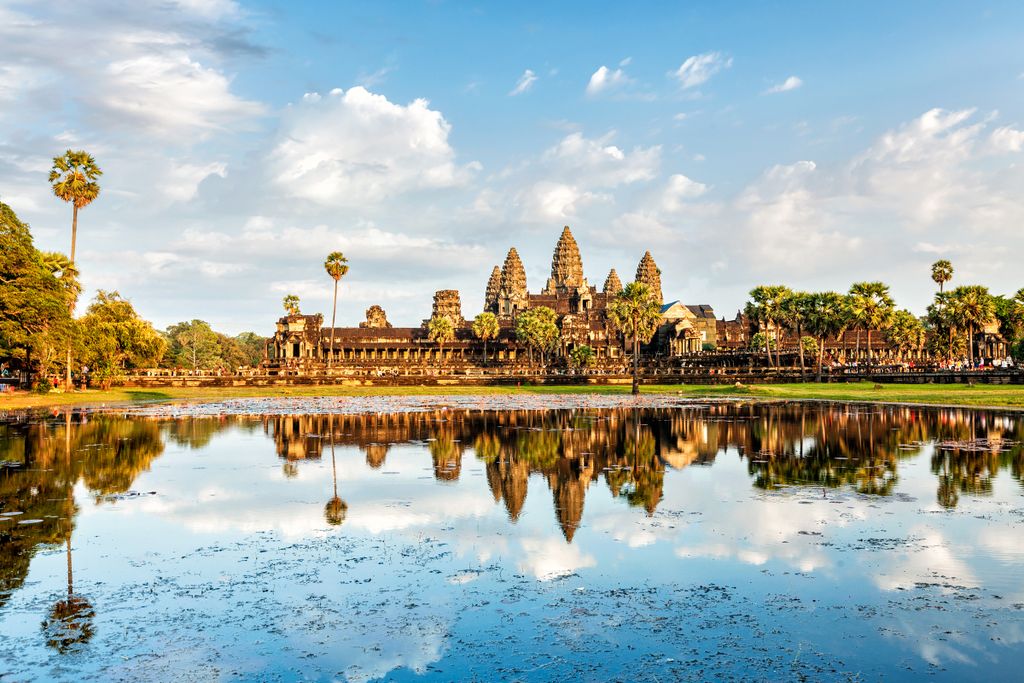 If you are in Ratanakiri, getting to Siem Reap is quite easy. Banlung is the main town and capital of the Ratanakiri province which has the transportation to get to other parts of Cambodia. Many buses go to Phnom Penh multiple times a day and to Siem Reap once a day. To get to Siem Reap, you can take a bus, minivan or taxi and it will take you at least 8 hours.

From Banlung to Siem Reap by bus

The distance between Banlung and Siem Reap is 450km. It is the most popular town for tourism in Cambodia because of the Angkor temples. Before, buses used to take you through Kampong Cham which is not so direct and would take up to 12 hours, but now that the paved the road through Stung Treng the distance is shorter.

Note: It is a good idea to confirm that you will be going through Stung Treng and not Kampong Cham and transferring vehicles.

Tip As this route is less travelled, it is best to book through a travel agent or your guesthouse as the companies don’t advertise their services very well so the information is difficult to find online or on your own.

Large buses are not as common on this route as minivans. Buses normally transport people between the larger cities, and Banlung is not on the beaten path. There a few companies that will do the trip but it may take a little longer because the larger the vehicle, the slower it has to go in Cambodia.

The buses are much the same between companies, offering air-conditioning and stops every few hours. They may say they have wifi and water but they probably will not – so charge your devices and bring some snack and water for the trip.

The bus will leave in the morning at 7am or 8am to make the trip during the daylight and will cost around USD25. Leaving from Banlung, you do not have to book far in advance.

Note: During rainy season the buses may take much longer or be cancelled due to the weather.

There are also big buses travelling via Kampong Cham. The 11-hour trip will cost you USD21.

From Banlung to Siem Reap by minivan

This is the most common way to go and probably the fastest. Minivans connect the more remote locations to the large cities and are offered to Siem Reap by more companies. These usually fit 12 people but as many are locals, they transport lots of goods and the vans can be packed full with luggage and boxes.

Minivans can drive faster as they are smaller vehicles and have regular stops but will stop if you need to jump out somewhere or go to the bathroom. These will also leave early in the morning and cost around USD25 and should take 7 to 8 hours depending on the season without any delays.

Note Minivans sometimes offer to pick you up and drop you off at your hotel or guesthouse which is convenient but this can add an extra hour on to the trip because of all the stops.

The most popular choices for taking the monovan between Banlung and Siem Reap are:
– Rith Mony Bus Company – USD25
– Asia Van Transfer – USD24

From Banlung to Siem Reap by taxi

Taxis are a common way to travel in Cambodia, as they are often faster as the driver goes as quickly as he can in order to do another trip. You can get a shared taxi or hire a private one. Shared taxis may have 7 people or more in a normal sized car, they will fill the car to maximum capacity so many people often buy two seats in order to have more room. There is no regular departure time for these cars as they wait until they have enough people to leave, but as the usually only drive during the daytime since the roads are not lit, they will load the car early in the morning for the long trip.

A private taxi will also drive crazy but you will get there more quickly in comfort and can tell him to stop wherever you like along the way and will drive you directly to your destination, not just the bus terminal. However these may be expensive as it is a very far drive and the price can vary depending on the driver, if he is with a company or not, could be anywhere from USD80 to USD140 based on the season, the day of the week or the weather.

For local taxis you will have to ask your guesthouse or a travel agency to organize.

Why go to Siem Reap

Siem Reap is the town closest to the ancient temples of Angkor and runs on the tourism of the most popular place to visit in Cambodia and perhaps Southeast Asia. The most famous temple is Angkor Wat, the largest religious monument in the world, built during the 12th century but there are plenty more temples that you can explore nearby Siem Reap as the Angkorian Empire built many in the region. The town sits on a river which flows to the Tonle Sap lake, the largest lake in Southeast Asia which is home to many floating villages. There are many activities and cultural events to do in Siem Reap, from trekking and zip-lining to visiting temples and the countryside or craft shops and yoga retreats. There are plenty of restaurants and hotels catering to all kinds of taste as well markets and entertainment open all day and night.

Siem Reap is well connected to other places in Cambodia but still a little far from the coast. The route to Thailand and Cambodia’s capital, Phnom Penh are the most frequented.

The road has recently been paved to Phnom Penh so the trip now only takes 4 hours and is offered by so many companies that you can leave at any hour you choose, by bus, minivan, taxi or plane.

To get to Thailand, you can fly – there are direct flights from Siem Reap to Bangkok or Phuket or go over land via Poipet, which is only 2 hours away but you will have to change vehicles at the border. It is quite a streamlined process now yet does get delayed during high season.

Getting to other towns in Cambodia from Siem Reap by bus is also very easy, although may take longer. Recently a flight has begun to connect Siem Reap to the port and beach town of Sihanoukville. Otherwise you will have to go via Phnom Penh just as you would for Kampot or Kep, taking 9 hours or more.

Battambang is Cambodia’s second largest city and easy to get to from Siem Reap, taking only 3 hours by minivan, or you can take a boat along the lake if you have plenty of time.