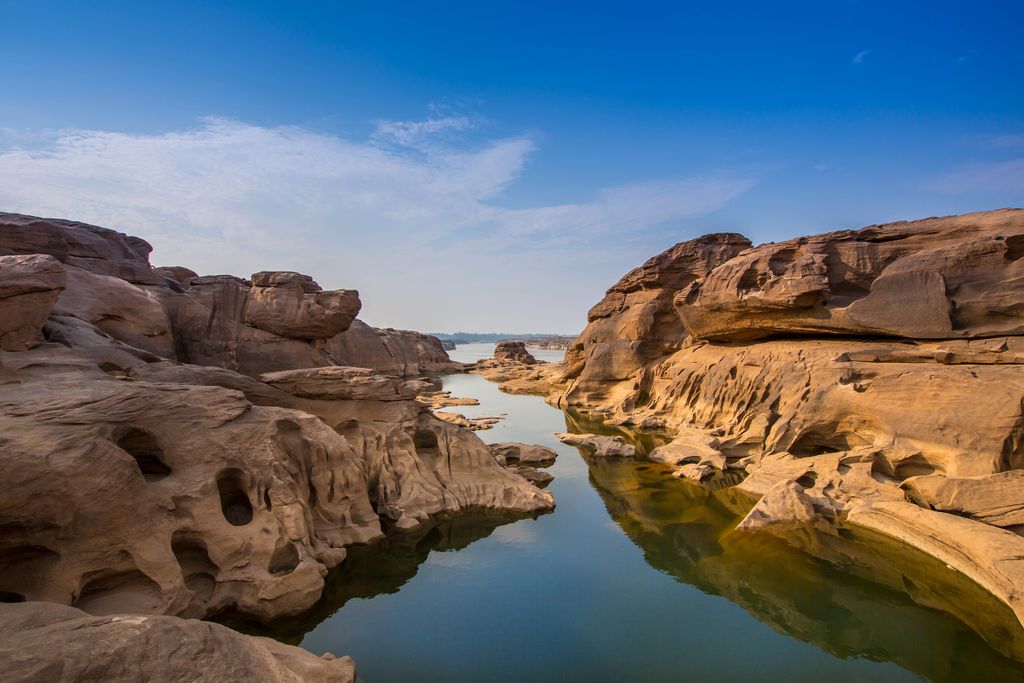 Ubon Ratchathani? No, not Nakhon Ratchasima; and no, not Udon Thani. Never heard of? Little surprising as for many foreign travellers Ubon Ratchathani, one of the four major centres of Isan, is nothing more than a necessary stop on their way to Southern Laos. Yet the easternmost province of Thailand is a must-see destination for those who seek getting off a beaten track. Deep Buddhist traditions, spicy northeastern flavours, welcoming locals and three national parks are a good reason to explore. Ubon Ratchathani is home to the ‘Grand Canyon of Siam’ and arguably the most colourful of all the Candle Festivals in the whole country is held there.

How to get from Bangkok to Ubon Ratchathani

Go overland by bus or train or fly from Bangkok – Ubon Ratchathani has great transport connections with the capital and many cities of Isan and the North, including Khorat, Khon Kaen, Mukdahan, Nakhon Phanom, Nong Khai, Chiang Mai and Chiang Rai.

From Bangkok to Ubon Ratchathani by bus

The main bus terminal serving Bangkok–Ubon Ratchathani route is Morchit, from where buses to other northern and northeastern destinations leave, too. Morchit is located in the northern part of Bangkok close to BTS Morchit station; note though that to get to the bus terminal from there you will need to make a short two km ride by MBTA buses #136 or #145 or by taxi.

Morchit looks chaotic from the first sight, but it is surprisingly easy to navigate. There are several food courts there, 7/Eleven convenience stores, ATMs and even market stalls outside the main building. Cashiers and the bus terminal staff help passengers find their way.

Buses cover the distance between the capital and Ubon Ratchathani in about 9–10 hours, and a number of operators offer Express, VIP and VIP24 buses to choose from.

The prime choice is definitely VIP24s as they offer the most comfortable ride. There are only three seats in a row instead of usual four which means more space for your legs and elbows. A VIP24 ticket with Lotus Phibun Tour costs THB730, but note that these are seats in a double-decker, with normal seats (THB550) on the upper deck and VIP seats on the lower one. This bus departs at 6.45pm and reaches Ubon Ratchathani at 3.50am.

Two other VIPs, which are more convenient schedule-wise, are a Chanapai Tour 8.05pm bus arriving at 4.35 and a Lotus Phibun Tour 8.30pm bus (5.35am). All the other departures of the same companies are Express buses with tickets sold at THB470-THB490. There is a more expensive Air Ubon Express bus at 9.10pm (5.40am; THB590) but they provide exactly the same service with the only difference of being the fastest option (8½ hours).

As usually, all buses make at least one pit stop at large gas stations with convenience stores, coffee shops and toilets on their way and provide snacks and water on board.

From Bangkok to Ubon Ratchathani by train

The Southern Laos branch, aka Ubon branch, of the Northeastern Line of Thai Railways terminates in the town of Warin Chamrap, where Ubon Ratchathani station is located. It is a short ride by tuk-tuk or songthaew over the river to Ubon Ratchathani from there.

Trains for Ubon Ratchathani leave from Hua Lamphong Train Station in Bangkok. Currently there are six departures per day. Before reaching Ubon Ratchathani, trains pass Nakhon Ratchasima, Buriram, Surin and Si Saket. Depending on the departure, the whole trip may take anywhere from 8½ hours to 11½ hours.

You have the whole range of the types of carriages available on the route, from spartan fan seats only to plush first class sleepers. Two morning trains, #21 at 5.45am (arrives to Ubon Ratchathani at 2.20pm), which is special express and the fastest one from the bunch, and #135 at 6.40am (6pm), offer second class AC or fan seats only at THB800 and THB550, which is definitely not the best investment ever as, firstly, with approximately the same money you can buy a considerably more comfortable night sleeper and, secondly, you loose quite a bit of your daytime just observing those rather monotonous flat rice paddies of Isan with occasional buffalo grazing here and there.

One afternoon departure (#145) at 3.20pm reaches Ubon in the small hours of 2.40am which is rather inconvenient. There are second class fan seats only in train #145, too, at the same price of THB550.

Night trains are the most convenient choice for getting from Bangkok to Ubon Ratchathani. There are two rapid trains, #139 at 6.55pm (6.15am) and #141 at 10.25pm (9.45am). The former is a great choice as it has second class fan sleepers at a bargain price of THB700. Fan sleeper is normally a reasonable compromise between price and level of comfort, and a fan carriage in many cases is much better than an AC carriage known for freezing temperatures. The latter train (#141) has second class fan seats only at THB550.

Tip: If you are a solo woman traveller or have your little kids in tow, consider a second class AC sleeper ladies only. These carriages have been introduced just recently and now are available on the majority of long haul routes.

From Bangkok to Ubon Ratchathani by air

Yes, you can fly to Ubon Ratchathani, too. A number of low-cost operators offer quite reasonable prices and the trip takes just an hour. It will cost you from THB700 to THB1000 on average to get from Bangkok to Ubon Ratchathani one-way with Lion Air, AirAsia and Nok Air – even cheaper during promotional periods. Note though that basic airfares with low-cost airlines may include limited or no registered luggage and no inflight meals; in certain cases you will need to pay extra for check-in, too. All the above-mentioned companies are based in Bangkok’s second largest airport, Don Mueang, located to the northeast of the capital.

If you need to fly from Suvarnabhumi Airport, consider Thai Smile, a subsidiary of the national carrier Thai Airways International. Tickets are usually more expensive, but include luggage and even meals.

From Ubon Ratchathani to Pakse in Laos

There are two international buses a day going from Ubon Ratchathani to Pakse in Laos through Chong Mek-Vangtao border crossing. The crossing is open daily from 6am to 6pm, and sometimes (not always) an ‘extra hours’ fee in charged on the Lao side on weekdays after 4pm and on weekends. The total travel time from Ubon Ratchathani to Pakse including waiting time at the immigration on the both sides is about three hours.

There is a number of quite impressive temples in Ubon Ratchathani, including Wat Thung Si Mueang dating back to the 19th century with a charming wooden library in the centre of a pond; Wat Chaeng with an unusual crocodile balustrade; and Wat Nong Bua famous for its rectangular chedi. If you venture to the south of the province along the Mekong River, make sure to call to Wat Siridorn Wararam Phu Prao at sunset – it is an amazing experience!

Ubon Ratchathani province is also home to Sam Phan Bok Canyon, a mysterious place with ethereal moonscapes. The best time to visit is during dry season, when the water level in Mekong lowers making endless holes and cavities the river has dug through its stone bed visible.

Rock paintings, ‘mushroom’ stone formations, picturesque waterfalls, incredible variety of wild flowers and nature trails fill Pha Taem National Park. If you are going to visit only one park in Ubon, make sure it is Pha Taem.

A convenient base for exploring Pha Taem National Park, a little scenic town of Khong Chiam ouzes endless charm. It sits at Mae Nam Song Si, the confluence of the red Mekong River with blue waters of the Mun River. Though the destination is well known to Thai tourists, if you happen there during weekdays, you will enjoy the serene, laidback atmosphere of the town all by yourself.

Transportation from Bangkok to Ubon Ratchathani

RK
Robert K
Train #135 2nd Class AC seats only, Thai Railways (การรถไฟแห่งประเทศไทย), Aug 13, 2021
Train ride was the best
JL
Johannes L
Bus VIP, Mahachanachai Ubontour, Oct 19, 2020
Older bus. They stored some metals (possibly tools) in the overhead storage, and every turn it was kling-klang of the metals hitting each other. Nevertheless, I was able to sleep/drowse away on long straight stretches.
BP
Brian P
flight Economy, Thai Smile (ไทยสมายล์), Sep 8, 2020
My trip was cancelled due to covid epedemic and I was rather angry that I did not even get a apology or a redeem voucher for my expense ..overall I know my trip would have been first class as I have travelled this route often to see my girlfriend in Isan We both are hopefully going to be together after this turmoil has passed ..may I wish all your staff to stay safe and continue your service
AB
Aleksander B
Train #23 1st Class Sleeper, Thai Railways (การรถไฟแห่งประเทศไทย), Mar 8, 2020
12goAsia bangkok, great service.
DZ
Daniel Z
Train #23 1st Class Sleeper, Thai Railways (การรถไฟแห่งประเทศไทย), Jan 31, 2020
Everything worked perfectly, I can recommend this service
RO
Ruprecht O
Train #23 1st Class Sleeper, Thai Railways (การรถไฟแห่งประเทศไทย), Dec 27, 2019
very friedly and helpful Staff!
S
Suzanne
Train #67 1st Class Sleeper, Thai Railways (การรถไฟแห่งประเทศไทย), Dec 25, 2019
The team at Go Asia were super helpful and flexible! They booked train tickets for us at very short notice and kept us informed of progress every step of the way. Thanks Go Asia! I'll be using your service again
NW
Niels-peter W
Bus VIP, Air Ubon Sombat, Jul 3, 2019
Very very nice bus, nice staff, good temperature, bedt seats i've ever had on a bus. Slept the whole night more or less
ZH
Zari H
Bus Express, Chanapai Tour (ชนะภัยทัวร์), Jun 1, 2019
It was slow and I arrived an hour later that it displayed. Snack was a cake and water with a night stop at a basic rest stop with hot food. It was ok. You pay for what you get.
BP
Brian P
flight Economy, Thai Smile (ไทยสมายล์), Apr 29, 2019
First class ,excellent and well provided service as I would expect from Thai airways.....
4.2
116 customer reviews
5 51%
4 31%
3 9%
2 5%
1 4%