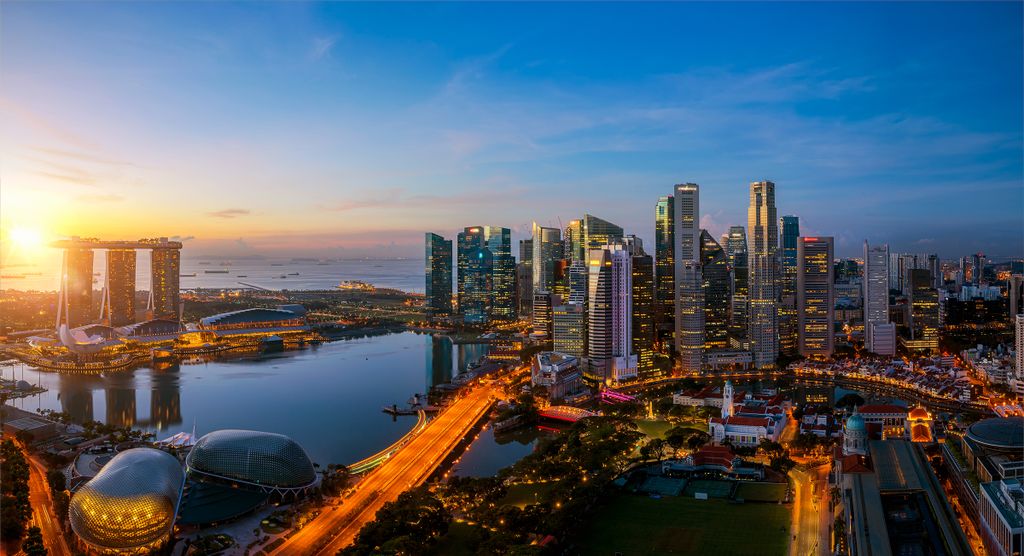 Why go to Singapore

Riverside colonial mansions rub shoulders with gleaming state-of-the-art skyscrapers; modern shopping malls in Orchard Road compete in popularity with bustling markets in Chinatown and Little India; majestic Marina Bay Sands towers rise high in the horizon and gigantic Super Trees leave you speechless. Streets dressed in glass and concrete coexist peacefully with green parks and the imposing Sentosa Merlion observes silently its lands. The former British colony has become Asia’s most expensive city after Hong Kong and Beijing; the only Asian country with the top AAA rating from all the credit rating agencies, Singapore is one of the four Asian Tigers. It is fun to reflect on how time flies and changes the faces of world cities sitting comfortably in Long Bar at Raffles Hotel sipping the famous Singapore Sling and, following century-old tradition, throwing nut shells right on the floor.

Very clean and somewhat tough with its strict rules, Singapore has its undeniable appeal, and it is not rare to hear from those who have just come back from their first visit to the city-state that Singapore feels to them as the perfect place for living.

How to get from Bangkok to Singapore

The easiest, quickest and most obvious way to get from Bangkok to Singapore is undoubtedly by plane. There are a lot of flights by different carriers connecting the Thai capital with the world’s only island city-state. But the real adventure-seekers may opt for an overland travel, too. If you have enough time at your disposal and enjoy travel as a process and not only as a mere necessity for getting from point A to point B, you may make your trip from Bangkok to Singapore an amazing quest.

From Bangkok to Singapore by plane

There are a number of low-cost carriers plying the skies between Bangkok and Singapore: from national flag carries of Thai Airways International and Singapore Airlines to Singapore-based Tiger Airways and Bangkok-based Thai Lion Air and AirAsia. All of them do a great job bringing you to your destination in just under three hours.

The most budget-friendly companies serving the route between Bangkok and Singapore are Thai Lion Air, which is an associate of the Indonesia-based Lion Air company, and Thai AirAsia. Both companies fly to Singapore Changi Airport from Don Mueang Airport in Bangkok. Lion Air operates two flights a day (at 7.40am and at 3.40pm); AirAsia has 5 departures from 7am till 6.50pm. As a rule, Saturday and Sunday flights are about 25% more expensive compared to weekdays opportunities; but in general tickets are priced between THB2200 and THB3500 one-way, which is a great deal anyway. With Lion Air you can often find cheaper tickets; note also that Lion Air normally includes 20 kg of checked-in luggage into the ticket price, while with AirAsia you have to pay extra for your luggage.

In Bangkok Lion Air and AirAsia are based in Don Mueang International Airport to the north of the capital. To get there, use airport shuttle buses (routes A1 and A2). A1 starts from Morchit bus terminal and A2 originates at the Victory Monument, calling en route to Sanam Pao, Ari, Saphan Kwai and Morchit BTS stations (THB30). The latter is also served by A1 route. Travel time depends on traffic and is from 60 to 80 minutes. There are commuter trains between Hua Lamphong train station and Don Mueang airport, too. Trains take about 50 minutes to get from the railway station to the airport and are always a secure bet. Operating time is from 4.20am till 10.25pm.

In Singapore you arrive to Changi Airport located in the eastern part of the island. One of the best airports in the world, Changi – regardless its size – is easy to navigate and has all possible facilities a traveller may fancy.

Getting from the airport to the city is straightforward. Public bus 36/36A heading to the centre stops at the bus bay of Terminals 1, 2 and 3. The estimated travel time to the city centre is about one hour. Note that you have to pay the exact fare to the driver (SGD2.50) as no change is given. A quicker transfer is provided by private taxi (from SGD20 to SGD40, depending on your destination; plus SGD5 airport tax and 50% night surcharge between midnight and 6am). There is the airport shuttle bus (SGD9) which leaves Changi every quarter of an hour and drops off passengers at many downtown hotels. It is a decent compromise between slower public buses and more expensive taxis. From Terminals 2 and 3 you can as well walk to the train station for further transfer to a westbound train at Tanah Merah station.

From Bangkok to Singapore overland

If you are after a colourful adventure, do not hesitate to travel from Bangkok to Singapore overland. Split the distance into several legs making overnight stops at every destination to get the most of your trip. The overland travel most probably will cost you more compared to what you would have paid for an air-ticket, but your expenses will obviously be compensated with amazing experience any overland travel guarantees.

One of the possible ways to get from Bangkok to Singapore overland is to take an overnight train or bus from Bangkok to Hat Yai first. Depending on your choice of the means of transport, your journey will take from 13 hours to 18 hours and cost from THB800 to THB1200.

Spend the morning in Hat Yai savouring the local flavours to catch an afternoon shuttle train to Padang Besar (1.05pm; 55 minutes) to change to one of the evening trains from Padang Besar to Kuala Lumpur (6 hours, from MYR80) or stay in Hat Yai overnight and hop onto a morning bus to Kuala Lumpur instead (eight hours, THB500). There are a lot of friendly old-school guesthouses in Hat Yai and authentic Chinese dishes do not lack, either. It is actually a very special experience to have a glimpse of China while staying in the south of Thailand.

Whether you decide to spend a day or a week in Kuala Lumpur, you are sure not to get bored! With its rich colonial heritage, state-of-the-art Petronas Twin Towers, museums and parks aplenty, Kuala Lumpur is a premier tourist destination. From the Malaysian capital it is an easy five-hour ride to your final destination (THB600-THB900). Take a bus from Kuala Lumpur to Singapore and enjoy this Asian Tiger full of futuristic wonders and natural attractions.

Note that Singapore is very strict in what concerns bringing cigarettes, alcohol and drugs to the country. Hefty fines are applied for not declaring cigarettes and alcohol, and hefty duties are levied on these goods in case you do declare them. There is a mandatory death penalty for drug trafficking carriers.

Tip: If you are ready to make one more stop on your way from Kuala Lumpur to Singapore, do not miss the opportunity of visiting a historical Malaysian city of Malacca (Melaka). Only two hours separate Malacca from Kuala Lumpur, but a wealth of attractions – an outstanding Baba and Nyonya Peranakan Museum , a replica of the Portuguese Flor de la Mar ship, arguably the best zoo in Malaysia, just to name a few – make it a rewarding stop. Add another four hours from Malacca by bus and find yourself finally in Singapore.

Thing to do in Singapore

To feel the real taste of the city, let modernity and history go hand in hand during your stay in Singapore. Shop till you drop in Orchard Road, dance till you are dead in Clarke Quay, gamble, lounge, splurge, and do not stop until you have tasted the best of Perenakan, Malay, Chinese and Indian dishes all around the city. Here are some ideas not to miss.

And remember that no visit to Singapore is complete without paying respect to the city's founder, Sir Raffles. Greet him with a classic Singapore Sling at the signature Raffles Hotel. Prosit, dear Sir Raffles, and accept our most sincere gratitude for your outstanding creation.

Transportation from Bangkok to Singapore