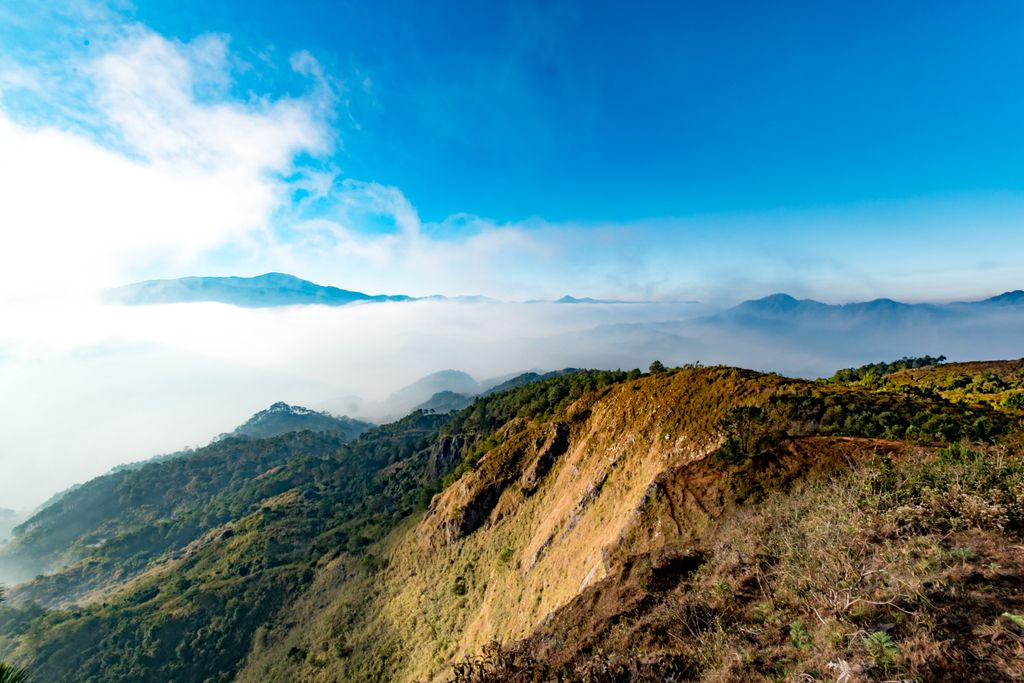 Located approximately 200 kilometres northwest of Banaue, Sagada is one of the most popular tourist destinations in the country. Sagada is famous for its hiking trails, cool climate, foggy mountains, and stunning natural attractions. The only way to get to this relatively small mountain town is overland from either Baguio or Banaue – in this article we will focus on the latter. This also further assumes that you have already made your way from Manila to Banaue via Coda Lines, Ohayami Bus, Autobus, or Dangwa Tranco.

There are several ways for you to get from Banaue to Sagada.

Van from Banaue to Sagada

Taking a van is arguably the easiest and most convenient way to get to Sagada. As soon as you get off your bus in Banaue, van drivers will approach you asking if you need a ride to Sagada. There is at least one van departing for Sagada at around 9am. As far as the majority of Manila–Banaue buses arrive to Banaue early in the morning between 5am and 8am, you will have enough time to grab a quick breakfast in town.

Note that the van will leave near the Banaue Tourist Information Centre so do not venture too far out. One-way fare is about PHP300 per person and the travel time is roughly 3 hours with a quick stop at one of the most spectacular viewpoints in Cordillera.

Jeepney from Banaue to Sagada

Jeepney to Sagada leave from the same terminal as for Bontoc located at the Banaue Public Market. Travel time is between 3 and 4 hours as jeepneys are often overloaded and travel at a lower speed than vans plus make two stops for a meal and one more – at the aforementioned viewpoint.

Jeepneys won't depart unless there are at least 4 passengers but during the peak season they fill up extremely quickly and you are more likely risk finding no seat than spending much time waiting for other travellers.

From Banaue to Sagada via Bontoc

Another way to get to Sagada from Banaue is via Bontoc what means a short detour. All the big buses follow this route calling to Bontoc first and then proceeding to Sagada. Check Coda Lines for the most comfy ride (3 hours, at least four departures between 5am and 7am).

It takes around 2 hours to get to Bontoc and costs anywhere between PHP150 and PHP250.

Getting from Bontoc to Sagada is possible via jeepneys. A one-way ride will cost you about PHP50. There are multiple trips a day from as early as 6.30am till approximately 5.30pm. Note that if you arrive to Bontoc later in the evening, you won’t find any transport to Sagada. You may be lucky to find a local to give you a lift but traffic is really thin after dark. It takes between 45 minutes and an hour to get to Sagada.

The ride to Sagada is very scenic and you may want to attempt doing it Filipino-style and climbing on the roof of the jeepney, what is called topload.

Instead of getting on an overcrowded jeepney you can hire the whole vehicle from Banaue to Sagada all to yourself. It makes sense if you are travelling as a group. We did not do it ourselves but we were quoted PHP4000 in Banaue – we guess the rate is negotiable a bit as it costs PHP2000 to get to Bontoc and Sagada is only 30 km from Bontoc.

To enjoy your trip to Sagada to the fullest, try to plan it on a weekday when the town is more serene and not too crowded with tourists.

Make sure to pack layers to keep you warm during your travels as the mountain air can become quite cold especially if you are traveling around January or February.

Lastly, if you are making your way back to Manila from Banaue, make sure to get your return ticket in advance.

Transportation from Banaue to Sagada